The History of Dystonia Network of Australia Incorporated (DNA) 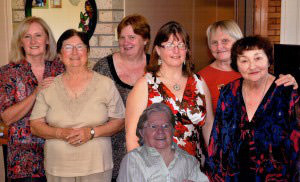 with its muscle pain,

continuous spasms inside and out,

but it will never destroy

our minds, our hearts, or our souls.

DNA evolved from the local Blue Mountains & Greater Sydney Support Group (BM&GSSG) which meets bi-monthly in Leura NSW. The idea took shape when Kerrie Jackson, the founder and coordinator of the Blue Mountains group in 2005, planned to attend part of the Parkinson Disease & Movement Disorder World Congress  where there would be speakers and representatives from 75 countries in June 2013  as she had in many conferences before, when she received a message saying that Associate Professor Lynley Bradnam was organising a Dystonia booth at the Congress.

She jumped at the chance to be the representative at the Dystonia Booth, as she was always thinking of ways to spread the word about Dystonia and to let people know about the Blue Mountains Dystonia Support Group.

This booth was made possible by the efforts of Associate Professor Lynley Bradnam who we sincerely thank for all her help. We also extend the thanks to Lee Pagan, Hariklia Nguyen and Nadine Schnabel for providing cards and pamphlets on the Australia Dystonia Support Group (ADSG internet group), a support group on Facebook. During the congress there were many approaches from medical, allied health, nursing, carers and people with dystonia to the support group booth for information.

This made the Blue Mountains group very aware of the need for a national organisation and led to the inception of DNA Inc. A previous non-incorporated group, Australian Spasmodic Torticollis Association, had disbanded in 2009 with funds of $8,000 that was to be transferred to a group with a similar interest in dystonia and the past members agreed to transfer of the funds to assist set up of DNA Inc. 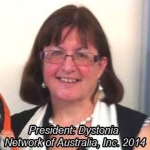 In communication with the New Zealand Dystonia Patient Network, in particular David Barton and Dave Mitchell, we were given sound advice on proceeding with the new organisation. Kerrie and Laraine McAnally, a retired clinical nurse consultant in movement disorder, with the backing of the local support group (BM&GSSG) commenced set up for incorporation and a business plan as well as skeleton brochures were written. However, all data was lost in the Winmalee bush fires in October 2013. Work recommenced in November 2013. 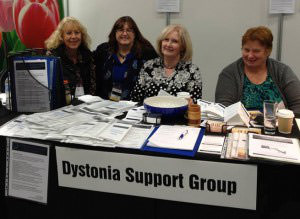 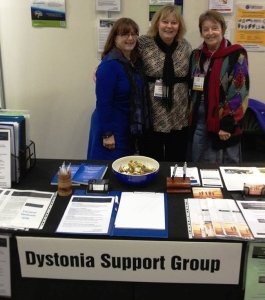 Kerrie and Anne with Lynley Bradnam 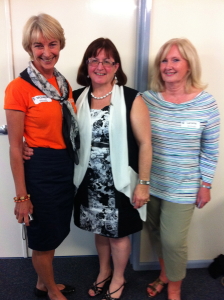 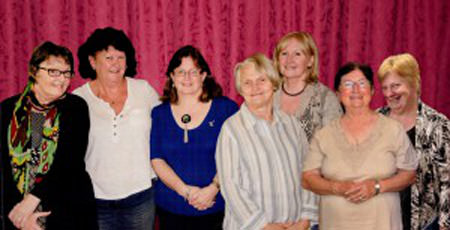 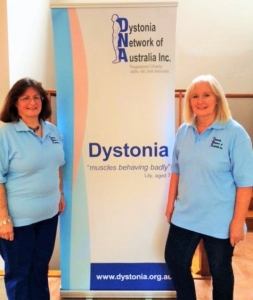 Adelaide Hills Radio as well as some other country radio stations have been running our ad for dystonia awareness week. Chris Carpenter,  General Manager of Adelaide Hills Radio, interviewed Kerrie & I last Thursday 3rd September 2020 about Dystonia and DNA. We won’t be giving up our day jobs any time soon but it went pretty well except for a couple of audio glitches.

With Permission of  The Hills Radio Adelaide

Dystonia Network of Australia Inc. (DNA) is thrilled to announce as part of the Dystonia Awareness week the segment on the ABC Health Report on Dystonia is now playing. DNA members Robyn and Paul are the patients who are telling their Dystonia stories and our DNA Advisory Board Members Associate Professor Victor Fung MDS Neurologist spoke on Botox and its effective treatment of Dystonia and how it works by altering messages from the brain, Doctor Stephen Tisch MDS Neurologist spoke about Movement Disorders and what they are, he also spoke on new MRI called a DTI which can show Dystonia the gapes in gene research, and how patients with the gene can sometimes have no symptoms and others without the gene can have the symptoms and finally how therapies are sometimes ahead of understanding conditions and Dr Lynley Bradnam Professor of Physiotherapy (NZ) spoke about Dystonia and what it is and different types of the condition also DBS surgery and how in the early days it was thought it was a hysterical condition and advances in imagery Here is the ABC link: https://www.abc.net.au/radionational/programs/healthreport/living-with-the-mental-weight-of-dystonia/11491220

Registered Charity ABN:  66 348 949 649,  Charitable Fundraising No: CNF/23669 with deductible gift recipient (DGR) status 2014 and a Medical and Multidisciplinary Advisory Board. 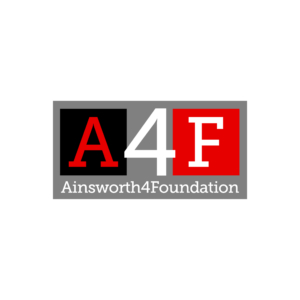