ABC Health Report on Dystonia
Dystonia Network of Australia Inc. (DNA) is thrilled to announce as part of the Dystonia Awareness week the segment on the ABC Health Report on Dystonia is now playing. DNA members Robyn and Paul are the patients who are telling their Dystonia stories and our DNA Advisory Board Members Associate Professor Victor Fung MDS Neurologist spoke on Botox and its effective treatment of Dystonia and how it works by altering messages from the brain, Doctor Stephen Tisch MDS Neurologist spoke about Movement Disorders and what they are, he also spoke on new MRI called a DTI which can show Dystonia the gapes in gene research, and how patients with the gene can sometimes have no symptoms and others without the gene can have the symptoms and finally how therapies are sometimes ahead of understanding conditions and Dr Lynley Bradnam Professor of Physiotherapy (NZ) spoke about Dystonia and what it is and different types of the condition also DBS surgery and how in the early days it was thought it was a hysterical condition and advances in imagery Here is the ABC link: https://radio.abc.net.au/programitem/pg16pAmWOV

Dr Lynley Bradnam  who is a Professor of Physiotherapy at the University of Technology Sydney has kindly giving us this link to her newly published article on gait and balance in people with Cervical dystonia.

With permission of Dr Lynley Bradnam

Dr Lynley Bradnam  was an Associate Professor of Physiotherapy at Flinders University. She is a neuroscientist and her interest in dystonia began while she was studying for her PhD. At that time, her interest lay in understanding the changes in the brain that seem to contribute to dystonia. Since arriving in Adelaide in 2011, Lynley’s has focused on dystonia, in particular the role of the cerebellum and whether non-invasive brain stimulation could be used as treatment.

Her work has received two Brain Foundation Australia research gifts and was featured on ABC news in 2013:

She has written about dystonia for the Brain Foundation and has published a paper on non-invasive stimulation in a neuroscience journal. 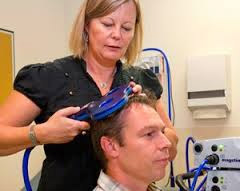 Recently, Lynley has become interested in studying how cervical dystonia affects function, including vision, balance, walking and cognition. She has developed a questionnaire to help identify if movement-related fear is a feature of dystonia for some people. Lynley would like to see better education for physiotherapists to understand dystonia and offer effective and research-evidenced treatment interventions.

Lynley has recently been appointed as Professor of Physiotherapy, Graduate School of Health, University of Technology (UTS), Sydney. Read Lynley’s article in The Brink by Fran Molloy: